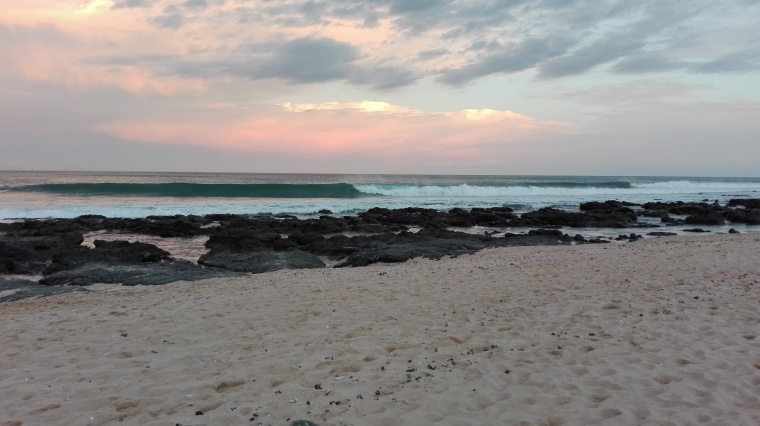 Our accommodation in Jeffrey’s Bay, at the end of the Pepper Street cul-de-sac at the heart of the area known as Supertubes, is called African Perfection – a name that could not have been more fitting. If Umhlanga was amazeballs, African Perfection is super duper amazeballs. We were lucky enough to be staying in the penthouse suite, which no doubt added to the magic, but was definitely not solely responsible for it. The whole establishment is immaculate with superb attention to detail; lots of small touches that may seem insignificant but added together really do go the extra mile to making you feel like a valued guest.

Accommodation sorted, now to discuss location. In what I would generously describe as vast experience in staying in beachside hotels, I have never stayed anywhere quite this close to the beach. Our balcony was in fact practically overhanging the boardwalk. From the day bed (yes, they had a day bed) I could see nothing but ocean. The crashing waves were a solid soundtrack. It was truly magnificent. 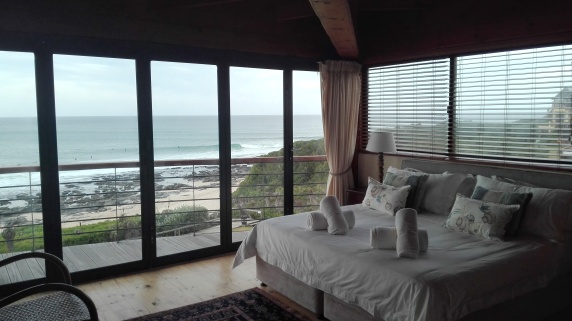 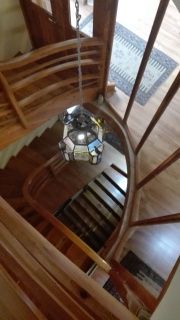 The main reason we stayed in Jeffrey’s Bay was that I insisted on it. On previous trips to visit the in-laws in nearby PE we had always made a turn to JBay – to scour the clothing factory outlets for bargains. Once we made it onto the beach too. The water was so blue, so calm, so crystal clear, I knew I needed to be around this little gem of the ocean for more than just an afternoon. So when the idea of a honeymoon road trip came about, it’s fair to say I planned the east coast route around JBay.

And it did not disappointment.

The Sunday morning scouring session of the shops was fruitful and I got good deals on things I probably don’t need but they’re pretty and I’m on honeymoon so bleh! Plus, I promised to buy something at every stop we make, no matter how small, and I think two t-shirts, a hoodie, three pairs of shorts and one pair of tracksuit bottoms adequately ticks that box, don’t you? Lunchtime brought a new scouring challenge, as surprisingly, Jeffreys doesn’t have as many restaurants as you might think. We settled on McTasty’s Diner. It was colourful and fresh and the waitress was enthusiastic where others had been lackluster.

We got superb milkshakes (mine had actual real life candy floss on it) and burgers with delightfully misshapen patties that you know can only be home made. Our waitress was a complete ditz; she delivered our milkshakes to the wrong table – a couple who already had milkshakes sitting in front of them, we had to ask twice for our Coke Lights in A Can. With anyone else it may have been frustrating, but there was something genuine and endearing about it that everyone could just laugh at (good naturedly of course). Overall it was a wonderful afternoon out. We discovered that the restaurant has had a complete brand overhaul as recently as two weeks ago, I really hope it’s one of the ones that makes it!

We then spent some time on the main beach where the sand is soft and the waves are gentle and predictable, before heading back to base for the United vs Chelsea match. The less said about that the better. I’m just glad we went for a walk at half time, got preoccupied collecting shells and ended up returning with only two minutes left of the match!

Defining Soundtrack: A playlist of all my favourite “noughties” music from the 2000s, compiled in Chintsa, featuring Nine Days, LFO, Jimmy Eat World, New Radicals and Matchbox Twenty, among others.

Items Purchased: A few clothing items as mentioned above. Just a few…

Things we have discovered thus far: 1. The N2 sucks. It has speed bumps, robots, roundabouts and it goes through every small town imaginable with their speed bumps, robots and roundabouts. 2. Every town in South Africa, no matter how small or how oddly named, has a Standard Bank branch, a Spar and at least two KFCs. 3. While we do own lovely backpacks we are definitely NOT backpackers. 4. Chintsa is breathtakingly beautiful and I hope no one ever finds out about it!

Thursday was a rather treacherous day of travel. We got an early start but the trucks and weather were not working in our favour and we soon fell behind schedule. Hubby was also not feeling too well (a Wimpy milkshake didn’t help so you know it must have been serious). But even still, while stuck in our third “stop-and-go” of the day, while Transing the Kei, we both agreed that it still beat a day at work! Parts of the route were also absolutely amazing – at several points we were driving up mountain passes mingling with the clouds. And I can’t tell you how cool it is to know that now when people talk about places like Port Shepstone, Qumba and Mthatha, I can actually say I’ve been there, even if I was only passing through. 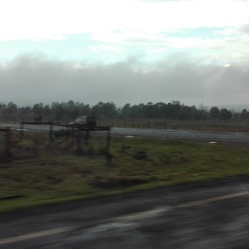 It was dark by the time we arrived at Buccaneers, which left me completely disorientated but excited to wake up the next morning and discover the view. (We arrived late on our first trip to Clarens last year and were very pleasantly surprised to find out in the morning that our B&B was completely surrounded by towering mountains and fragrant rose gardens). We were shown to a well-appointed room named Walter (after Sisulu I suspect, as our neighbours were Albertina). Opening the sliding doors to let in some cool night air, we were welcomed by the sound of crashing waves in the distance. I had high hopes for the morning’s view. 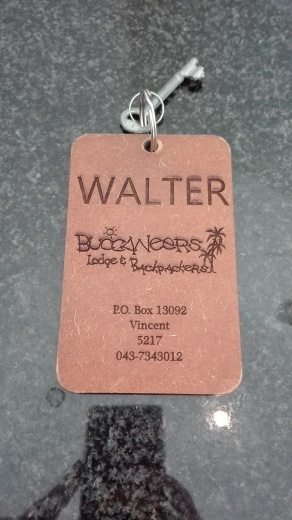 I don’t think anything could have prepared me for just how spectacular the view would be though. Buccaneers sits high on the hills between the ocean and the lagoon and our veranda gave us an incredible view of the lot. The previous day’s persistent rain had brought out the flying ants and the sun caught their wings as they fluttered about trying to survive longer than two minutes and do whatever it is flying ants are born to do (any takers, I really do actually want to know). The high vantage point means it is inevitably quite a trek to the beach, but it is well worth it. The untouched beauty of this wild coast beach makes Wilderness look like Durban in December. The sand is soft, the water is clear, the waves are predictable (and not violent as Hubby has tagged KZN’s seas). We walked a good distance before the wind picked up and covered my sunscreen slick skin head to toe in sand. Still, totally worth it! 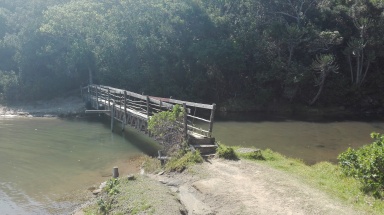 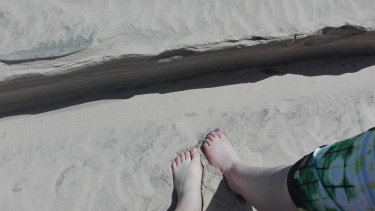 For lunch we chose The Barefoot Café, mostly because it sounded cool. And cool it was; with its quirky decor it was every bit as laid back as you’d expect a spot in this region to be. We had delicious burgers, I even indulged in a refreshing cocktail that involved cherry something, and we ordered take-away pizzas to serve as dinner – a very enjoyable afternoon out. Back at HQ it was time for an afternoon nap – that rare luxury that truly makes you feel like you’re on holiday! 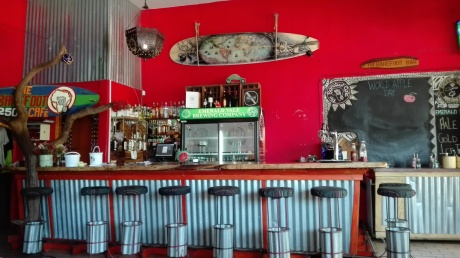 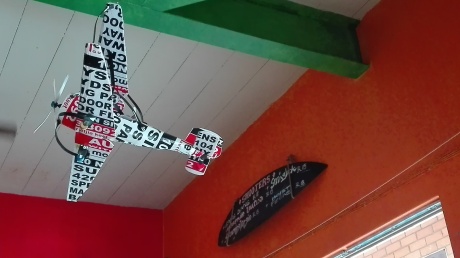 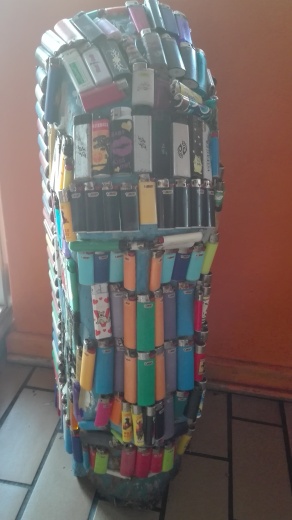 I would highly recommend Buccaneers – it caters to all ends of the budget spectrum, is well-maintained and easy to navigate. We stayed in an en-suite sea-view cabin, but the dorms seem to be extremely popular with foreign tourists, which bodes well. The people are friendly but not intrusive, there is a fridge to keep your Coke Light in a Can cold… what more could you want really?

Chintsa is somewhere I would very much love to come back to, if only it wasn’t so completely in the middle of nowhere. But then again, I guess that’s the whole reason it’s so special.